Also known as Nord in North America, the company founded in Sweden in 1983 by Hans Nordelius and Mikael Carlsson.

Quick Navigation
About Nord
My Initial Thoughts
Feel, Specifications, Dimensions, and Integrations
Advanced Features and Performance
Pros & Cons of Lead 4
My Final Thoughts
My Reviews for Other Nord Products

The Swedish instrument manufacturing giant Clavia announced, back in 2013 in Germany, that their at the time latest in line of Nord Lead synthesizers.

Since then, the Nord Lead 4 was called “a worthy successor” to its older brother 2X.

It is a powerhouse of quality.

In fact, Nord Lead 4 is largely based on the 2X, but with some modifications.

You’ll definitely love how easy it is to set up this synthesizer.

Nord has even included a few cables to get you started with experimenting! 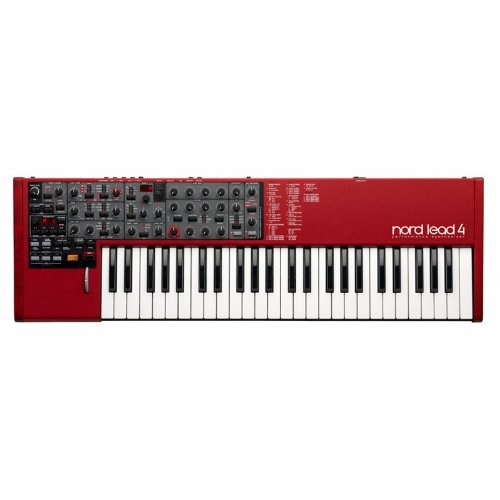 The entire control panel of this beast takes up less than half of its front panel.

While the LCD screen of Nord Lead 3 is gone here, the bright red theme remains.

An iconic feature to anyone marginally acquainted with the Nord series.

As for the reasons to purchase the Swedish red wonder, keep on reading!

As I mentioned previously, the all-red design is back with this model, down to the LED indicators, with dashes of grey and black to distinguish the editing panel.

The panel’s non-center position can be a bit of a problem to you during editing. The outer casing is very tough.

The good people over at Clavia added wood-ends on each side of Nord Lead 4 for the purpose of protecting it. It works both aesthetically and practically.

Similarly to the 2X, the Nord Lead 4 possesses four banks of 99 programs as well as the same number of performances.

The Lead 4 provides versatility at its finest, at all times.

Nord Lead 4 is lightweight and, despite its design emulating older models, rather pleasing to the eye. Its panel is easy to use despite its awkward sideways position. Also, for a 49 note keyboard, the amount of effects and their quality makes Nord Lead 4 an endlessly entertaining instrument.

The shallow key bed that is the Nord Lead 4’s keyboard contains 49 keys and performing splitting and layering on it is simple.

It’s important to note that the keys are velocity-sensitive and that there are octave shift buttons.

However, there is no aftertouch, as opposed to previous models.

It has 20-notes polyphony and is 4-part multi timbral.

The synthesizer’s Master Clock Synchronization allows it to sync up the delays, the arpeggiator and the two LFOs to the MIDI clock in four program slots.

The oscillator section has been refined, with a better VA engine.

Nord Lead 4 has a lot of interesting filters. The filter section has various modes (lowpass, highpass, bandpass) ranging from 12 to 24 decibels.

In addition, it has two simulations – those of a diode ladder filter and of a transistor.

This will help you with getting that old-school analogue sound of older instruments.

All of the voices have their own little section of effects – those being delay, reverb, bit crushing, and a Talk effect.

Nord Lead 4 is also compatible with most music editing software, and its connectivity options allow it to be used practically anywhere you need to make music.

Unlike its predecessors, most of its sounds feel polished and their quality kicked up a notch.

There is very little loss in audio during splitting and layering, and the transition between analogue and complex digital sounds is seamless.

The synchronizing abilities of Nord Lead 4, however, take the prize as their best unique feature, allowing for spectacular synchronization across all areas during use.

In the grand tradition of its forerunners, Nord Lead 4 is a brilliant synthesizer well worth your money.

What it lacks with its modest 49 notes, 20 polyphony notes and 4-part Multi Timbral settings, it more than makes up with numerous effects, filters, and options.

Add to that a perfect means of synchronization and a design you know and love, and you’ve got yourself a winner.

Or rather, a synthesizer ready to go.

My Reviews for Other Nord Products

My Lead A1 Review
Read More