In 1980 Casio released the Casiotone 201, its first electronic keyboard.

As a compact and attractively priced unit that could play sounds from various instruments, their products drew acclaim from music lovers around the world.

Quick Navigation
About Casio
My Initial Thoughts
Feel, Specifications, Dimensions, and Integrations
Advanced Features and Performance
Pros & Cons of WK7500
My Final Thoughts
My Reviews for Other Casio Products

Many people associate Casio with plastic keyboards that are best used as toys for kids.

In fact, it really deserves to be called “workstation”, as Casio decided to name it.

There are so many features and options that they can seem a bit overwhelming at first, including a 32-channel mixer, a pattern and song sequencer, tone and rhythm editor, arpeggiator and many more.

You basically get everything you need to bring your musical ideas to life in one place. 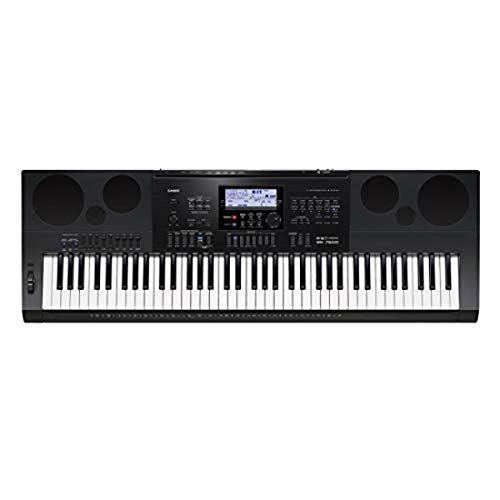 Casio WK-7500 has 76 standard size keys that are semi-weighted and velocity sensitive which makes them quite comfortable to play on.

However, they still do feel more like a plastic keyboard than a piano.

Overall, they are not too bad for a synthesizer in this price range.

When it comes to controls, there are plenty of buttons to simplify navigating through the operating system accompanied by a large LCD.

There are also 9 drawbars on the left of the panel, just above the keys.

They can be used to produce drawbar organ sounds, which is really a fun feature to play with, but they also come in handy for editing track parameters when you use the sequencer.

Furthermore, the tone editor lets you customize the selected tone parameters such as volume and pitch and you can use the mixer to apply effects so you can really get the exact sound you want.

The case is made of high-impact plastic, which is quite durable, but not as tough as metal. However, this makes it much lighter than metal keyboards.

The whole keyboard weighs 8.9 kg without batteries and it’s 118.7 cm long and 39.9 cm wide, so you could say it deserves to be called a portable keyboard.

It also comes with two built-in 7-watt speakers and a stand, so you can really use it to play anywhere you want. Even the battery life is quite decent - about 5 hours of constant use.

The 17-track sequencer is definitely the distinguishing feature of Casio WK-7500. It supports up to 16 tracks (actually 17, with an extra “System” track included).

Using an SD card, you can save data from the sequencer as a Standard MIDI file, but you can also record audio files.

This is what I liked most about this synthesizer - you can really use it to record music.

You can connect a microphone and external instruments which you can also record, and you can also connect the keyboard to a PC through the USB port.

Casio WK-7500 is a decent synthesizer, but it also deserves to be called an arranger keyboard thanks to the advanced recording and editing features.

Overall, this portable piano is really a positive surprise from Casio.

If you are looking for a versatile synthesizer and arranger that will not cost you a fortune, it’s definitely worth a try.

My Reviews for Other Casio Products